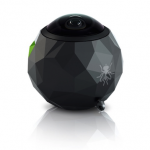 What you are seeing here is not a small grenade, but hopefully the TSA will figure that out before there are any Ahmed Mohamed mistakes. This is the 360Fly, and it is a single lens-camera that can capture seamless content at 360 degrees on the horizontal and 240 degrees on the vertical. I've tried out other 360 cameras before such as the V.360, and I'm hoping this one … END_OF_DOCUMENT_TOKEN_TO_BE_REPLACED