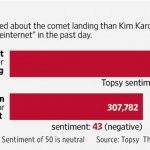 I'm going to have to apologize to my readers. I saw a meme the other day which used a stock footage picture of Captain Picard saying that we shouldn't be focusing on a naked picture of Kim Kardashian when we have landed on a comet? In case you haven't heard, Philae has landed on a something on a comet and I am told it was a successful drilling attempt. While I'm not … END_OF_DOCUMENT_TOKEN_TO_BE_REPLACED