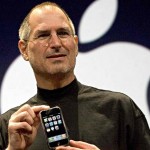 I'm sure anyone who reads my Speculative Fiction Saturday posts knows that I really can't stand the lack of originality in Hollywood. I have just heard that there is going to be a movie about Steve Jobs. Yes, you have heard this before. In fact, Ashton Kutcher was just in a film called Jobs, that apparently didn't do so well. Before that film came out, you could watch … END_OF_DOCUMENT_TOKEN_TO_BE_REPLACED