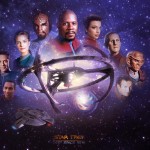 Well, what can I say about Star Trek? This was the fourth series, and it was meant to spin off from Star Trek: The Next Generation, with one minor crew member joining the cast, and a major crew member joining later on. This was Star Trek's effort at doing something new. The idea was that the action would take place in a space station and not a spaceship. In this case, … END_OF_DOCUMENT_TOKEN_TO_BE_REPLACED