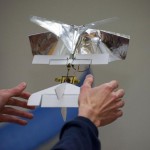 I think we all know that drones are going to be the wave of the future after Jeff Bezos announced that they would be delivering your packages from Amazon via flying machines. However, we really don't want the heaviness of drones, just the flying eye in the sky. Drones are being used to take aerial shots, but if they should fail, then look out below! Imagine if there was a … END_OF_DOCUMENT_TOKEN_TO_BE_REPLACED