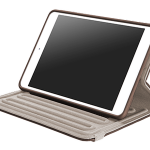 Today is the third part of the Domeo trilogy. This won't be like the Eagle trilogy, where I had four parts. As far as I can tell, I have exhausted the entire Domeo catalog! The problem is that I have nothing new to say about the Recliner for the iPad Mini. I have seen a lot of the features of the Recliner Mini on the Recliner for the iPad. Instead of the Bubbles that the … END_OF_DOCUMENT_TOKEN_TO_BE_REPLACED