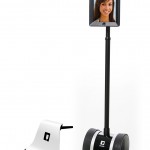 I have said before that the future of robotics and in general is telepresence. If you aren't familiar with it, think of it as a way of sending a robot in your place. You can literally be in more than two places at the same time, and the number of places is limited to how many of these things you can control. Double Robotics showed off their robot at CES 2014, which has a … END_OF_DOCUMENT_TOKEN_TO_BE_REPLACED