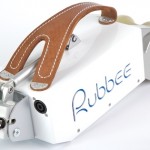 I have never used an electric bike before, but I believe that they would be quite useful when you don't feel like pedaling anymore. This Rubbee (which I assume is pronounced like "ruby") allows the user to turn their ordinary bike into an electric one (just like the title says). The Rubbee is a Kickstarter project, and it is supposedly able to connect to the bicycle in a … END_OF_DOCUMENT_TOKEN_TO_BE_REPLACED