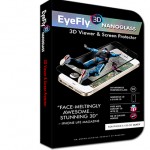 Okay, are we over 3D yet? I mean, I would imagine it was some cheap thrill when it first came out, and experienced some revival in the 80's, and another since the release of James Cameron's Avatar. Since then, I've seen some films in 3D, and I have enjoyed them. I honestly think I would have liked the 3D films that I saw just as much if they were in 2D. I'm not certain … END_OF_DOCUMENT_TOKEN_TO_BE_REPLACED