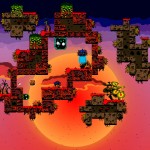 Well, there is nothing I like more than playing some Steam Games, and Fenix Rage, from Green Lava Studios, is quite addictive. Fenix Rage is a 2D action platformer which has a similar kind of play that I have seen before, I just can't think of the name. The game is about beating a level by getting a character from point A to point B, in the least amount of time. This is … END_OF_DOCUMENT_TOKEN_TO_BE_REPLACED