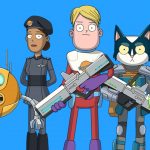 The thing about science-fiction epics on television is that it is starting to be done more successfully, but this is only a recent development. It was a quarter-century ago when Babylon 5 was released, an epic science-fiction series that had a definite beginning and end in mind. It lasted five years, but it was a gamble back then as TV audiences were not very committed to … END_OF_DOCUMENT_TOKEN_TO_BE_REPLACED