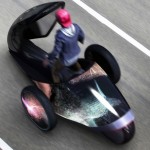 Toyota has recently unveiled the FV2, and it is one of those concept cars that will hopefully see the light of day. I'm not certain if I should be calling the Toyota FV2 a "car", but in its defense, it does have four wheels. I suppose that I could define it as a Segway times two, for its controls are very similar. You have to actually stand at the center and lean in the … END_OF_DOCUMENT_TOKEN_TO_BE_REPLACED