Gabriel Knight Sins of our Fathers. 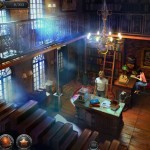 I had a chance to review another point-and-click adventure off of Steam, and I took full advantage of that, let me tell you. Gabriel Knight: Sins of our Fathers, was released about 20 years ago from Sierra On-Line. If you aren't familiar with Sierra On-Line, they created some of the best point and clicks with the King's Quest series. If you haven't heard of those, I can't … END_OF_DOCUMENT_TOKEN_TO_BE_REPLACED