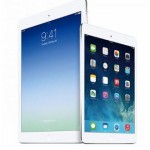 I don't know if you saw this coming, but Android has now surpassed Apple, at least in tablet form. A technology research firm known as Gartner has given a recent report saying that tablets for Android are 62 percent of the market share, and iOS iPads are now 36 percent. I personally think this is kind of funny, because a few years ago, Gartner predicted that Apple would … END_OF_DOCUMENT_TOKEN_TO_BE_REPLACED