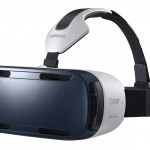 At a recent Developer Conference from Samsung, the big S unveiled the Gear VR Innovator Edition. As you can see, it looks a lot like the Oculus Rift that I was raving about so much at PAXPrime this year. The GEAR VR Innovator is powered by Oculus, but it does not have its own screen. It is made to pair with the Galaxy Note 4, and it is made for the smartphone's 5.7-inch … END_OF_DOCUMENT_TOKEN_TO_BE_REPLACED