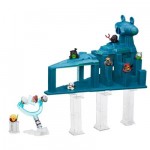 I suppose that I could have entitled this post with "Hasbro goes to a galaxy far, far away with the Angry Birds Star Wars toys". Get it? It's a Star Wars joke, and...they've been done to death. I had a chance to try out some of the new toys that Hasbro has to tie-in with the major franchise of Angry Birds, which ties in to one of the most popular franchises, ever. Let … END_OF_DOCUMENT_TOKEN_TO_BE_REPLACED