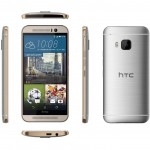 Well, I've had a chance to review the HTC One M9 Android smartphone, and what I will have to say is pretty positive. I'll go ahead and start with just how it feels in my hand. Even though the HTC One M9 is made of cold metal rather than warm plastic, I like its curve. I don't know if it is ergonomic, but I like it. One of the big selling points of the HTC One series is … END_OF_DOCUMENT_TOKEN_TO_BE_REPLACED