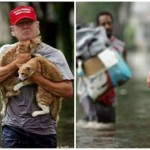 When I first saw the picture of Donald Trump carrying two cats, and the caption, "More Trump heroism that's being willfully ignored by the mainstream media!" It was in a post warning that it was a fake picture. I kind of scoffed at it, thinking,"Who would believe that picture is real? I don't see the physique matching that of Trump, and the skin tone is … END_OF_DOCUMENT_TOKEN_TO_BE_REPLACED