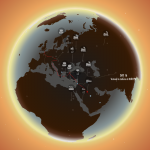 I think we have all at least heard of Around the World in 80 Days. It is a classic book by Jules Verne, but it has been done time and time again. The most recent re-interpretation had Jackie Chan in it, and it was an excuse to have a star-studded cameo adventure with a steampunk twist. There was an award-winning film of the book where the characters travel the world in a … END_OF_DOCUMENT_TOKEN_TO_BE_REPLACED