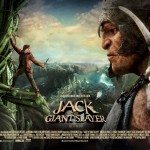 I mentioned the other week when I reviewed Sinbad: Legend of the Seven Seas that I usually don't review fantasy movies. Generally, I like to focus on films that deal with the consequences of technology, such as last week's Demolition Man. As I had a free Redbox movie rental available to me, I decided to give Jack the Giant Slayer a chance. I had been wanting to see it … END_OF_DOCUMENT_TOKEN_TO_BE_REPLACED