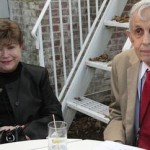 This is a time that I am sad to report that John Nash and his wife Alicia, died in a car crash in New Jersey on Saturday. Apparently, the two were in a tax that lost control and hit another car. If you have never heard of John Nash, he was a brilliant mathematician, and the only reason why I know him was because he was the subject of a film called A Beautiful Mind, which … END_OF_DOCUMENT_TOKEN_TO_BE_REPLACED