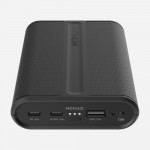 We've reviewed many a powerpack here at The Geek Church. Many of them have their own claims to set them apart from the others.  Per their website, Nomad is a company that brings products "designed for adventure." From their multiple products, we were sent the ultra rugged PowerPack to review. The Nomad PowerPack boasts an "ultra-rugged construction." Under that assertion on … END_OF_DOCUMENT_TOKEN_TO_BE_REPLACED