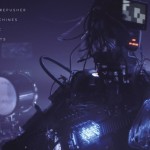 Considering music's trend for tech beats with acts like Daft Punk, is it really easy to see a world where music groups are completely robotic. This is the case with an album appropriately called Music for Robots, and it is created by a man known Squarepusher. His robot band is called the Z Machines, and they are a three-part band. Their guitarist named MACH plays with 78 … END_OF_DOCUMENT_TOKEN_TO_BE_REPLACED