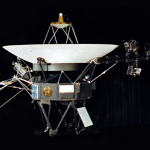 I realize that the title for this post is really cliche, and the fact that the first Star Trek movie featured a lost satellite named V'Ger, who was revealed to be the Earth satellite Voyager 6. I have just learned that Voyager I, which was originally announced in 1977, has just entered a new region called the "magnetic highway". If you are not familiar with the magnetic … END_OF_DOCUMENT_TOKEN_TO_BE_REPLACED