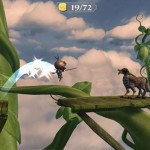 Normally, when I get a chance to try out video games, it is for Steam or the PS4, this time, I got to try it out for the Wii U, and I have to say that I was quite pleased with Robot Invader's Wind-up Knight 2 for Nintendo's Wii U. Unity Games recently brought Wind-up Knight 2 to the Wii U, and it was pretty popular on the Android and iOS, and it has an exorbitant amount of … END_OF_DOCUMENT_TOKEN_TO_BE_REPLACED