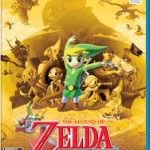 There is no real way of saying this other than just saying it: The Legend of Zelda: The Wind Waker HD is a cash-grab. The truth is that Nintendo realized once the Wii U came out that there wouldn't be another Legend of Zelda game for a while, but this is what fans wanted. I've said before how Nintendo just kind of makes its own rules and the fans just follow, but unlike … END_OF_DOCUMENT_TOKEN_TO_BE_REPLACED