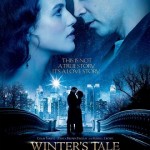 Don't feel bad if you haven't heard of this film, as it was released in February, and that's when the usual B-rated films, but not bad January films, get released. This is changing due to good movies that get released in February like The Lego Movie, but Winter's Tale isn't the unexpected treasure that I was hoping it would be. You know those films that come out, and you … END_OF_DOCUMENT_TOKEN_TO_BE_REPLACED