Our Review of the LEGO Technic Jeep Wrangler (42122) 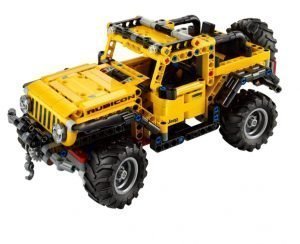 I suppose that you would have to be a big fan of Jeep in order to get the Jeep Wrangler, as it is a good model-ization of the actual vehicle.

Granted, it doesn’t have an engine or anything, but it does have a lifting hood.
It also has some interesting stabilizers that make the wheels take just about any terrain. The architects of the instructions also put this wheel on it so the front wheels will turn. Oh, there is also the working winch in the front.

So yes, the Jeep Wrangler has everything but a secondary model, which is usually rare in any LEGO set. It didn’t take too long to build it, and it is pretty inexpensive starter kit for anyone at $49.99 on the LEGO site. 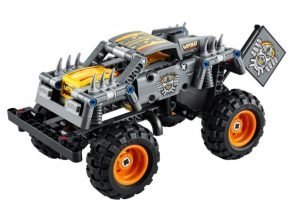 And now, I want to talk about something very simple. This LEGO Monster Jam Max-D doesn’t really come with anything big as far as the features are concerned, but it does have a cool pull-back motor.

Yes, you just pull it back, and then let it loose. A lot of old toy cars have this feature, and I am pleased to have this one as part of it. Unlike the Jeep Wrangler, it does have a secondary model of a quad-rider, and it also has the pullback feature.

If this sounds good to you, and I recommend it as a really quick and fun LEGO model, head on over to the LEGO site and pay $19.99 for it.

Our Review of the LEGO Technic Remote-Controlled Stunt Racer (42095) 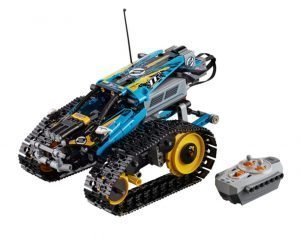 So now I will talk about something that I mentioned in our Sphero RVR review added it on the video just for fun. As you can see in the image, it has some cool tank treads, and you can see the remote control.

What you can’t see is that this particular guy has two engines, and you can rev them up with the controller. If you build it right, the one lever makes one tread go forward or backward, and the other lever does the same thing. If you build it wrong, like I did, then you will have to recalibrate it.

It has a secondary model that looks similar to the other one, and you can see that on the video below. This set is available for $99.99 on the LEGO site.