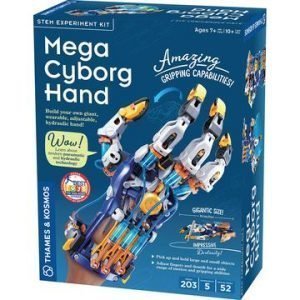 You might be wondering whey this is called a “Drew Review”, and this is why. As it so happens, my wife has recently appeared in the virtual audiences of a lot of talk shows including The View, Dr. Phil, Kelly Clarkston, Tamron Hall, and the Drew Barrymore show. As a reward for her participation, they sent her a few toys, and since we like to review stuff, we’re just going to review them.

This is the Mega Cyborg Hand, which allows you, the user to make a hand. Yes, you probably already have a hand, but you might as well have one that has hydraulics on it. It gives you a grip that allows you to pick stuff up and, yeah, that’s what it does.

Just to let you know, this is one very complex model. You know those old models where the parts are like on this thing that you have to cut apart, because they were just dipped in the same plastic mold? Yeah, this has it, and there are over 200 pieces here.

Yeah, a lot of assembly is required. I have to admit that these directions were very good at showing me what was what, and they even had a little comic book storyline as to why a cyborg hand had to be built.

The building involves a lot of details, and there are these tiny screws that you have to use on some steps. At least there is no glue, as it is mostly snap together. I had some trouble reading the instructions, as some steps aren’t exactly the clearest, even with pictures. I can imagine a kid getting quickly frustrated over this.

The exception is for the hydraulic parts, and I have to admit that I like building and learning about. You have to set these things up with water in them, which I didn’t like I first. After all, I don’t want to work with something that might spring a leak on me. You even have to oil these hydraulic things with this special oil that they give you.

If I had to complain, it would be that you really need to use every piece, and I thought I had one or two missing. There was one step that required a spring, and I didn’t realize that two of the springs that were included with the kit had somehow merged into one. It was weird.

Speaking of weird, I found that this hand can be put in such a way where it can be like a right hand, left hand, or some kind of claw thing. At first I thought that I had done the directions wrong because what I had at the end didn’t look like what was on the box, but the “thumb” is made to be moved.

I found this particular STEAM (Science, Technology, Engineering, Art, and Mathematics) kit on the Thames and Kosmos site for about $39.95, which I think is a good deal for what it is. As Cyborg from the Teen Titans, Justice League, and the Doom Patrol would say: Boo-yah!