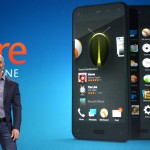 I reported two months ago that Amazon was rumored to be working on a new kind of smartphone, and I knew I was right to report on it, even though it was a rumor. Yesterday, Amazon's big head Jeff Bezos took the stage and announced the Kindle Fire Phone. I will have to say that this phone looks all kind of awesome as it has a 3D display known as Dynamic Perspective. It has … END_OF_DOCUMENT_TOKEN_TO_BE_REPLACED