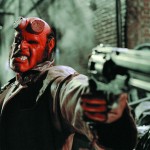 For some reason, I decided to have Hellboy week. Part of it was that I discovered the first movie on Netflix, and the found its sequel at the library. I once heard that studios did not want to touch a project called "Hellboy", and I think the reasons are pretty obvious. Does anyone really want to see a film where a devil is the hero? Well, if Christians avoid Hellboy … END_OF_DOCUMENT_TOKEN_TO_BE_REPLACED