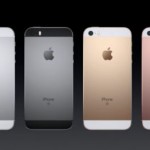 So, yesterday was a pretty big event, so what exactly happened? The answer is everything except one thing, and I will get to that. After some announcements about Apple in general, the first thing that was brought up was the new watch bands as well as a price drop for the Apple Watch at $299. Then there was talk about "a smaller iPhone", which is called the iPhone SE. … END_OF_DOCUMENT_TOKEN_TO_BE_REPLACED