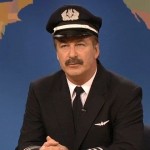 Yeah, that is Alec Baldwin dressed as an airplane pilot, and that was an SNL sketch back when he was kicked off a plane for not quitting his "Words with Friends" game. He had a good line during that SNL news parody, as he said: "Come on, if you think that a 747 could be downed by an iPod Touch that they would even let it near a plane?" Apparently, it is possible to screw … END_OF_DOCUMENT_TOKEN_TO_BE_REPLACED