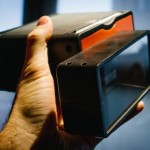 I am not certain if we really want 3D, as this come-and-go fad might have peaked shortly after Avatar was released. Still, if you want to take 3D videos and photos on your iPhone, you might want to look into a Kickstarter project called Poppy. Poppy is a non-electronic way of making 3D, which works a lot like a Viewmaster. You know, that toy from the seventies that gave … END_OF_DOCUMENT_TOKEN_TO_BE_REPLACED