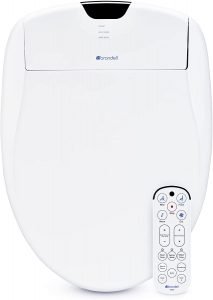 This would be the second product that I have reviewed from Brondell, The first would be with the Sanitizing Air Purifier, and now something that I have never reviewed before, a toilet seat. Not just any toilet seat, but a Swash 1400 Luxury Electric Bidet Seat.

I never thought that I was really a “bidet” type of family, but it is funny the direction that life takes you. I want to start by telling you that you can get this for you own family.

I have to admit that when I first got it, I was a little bit intimidated by it. The issue is that I knew that anything that was a bidet was going to be used for washing your backside, right? And to wash that backside, you are going to need water, right? So where does the water come from? And can you put the Swash 1400 on your own toilet without a plumber?

The answer to that question, or at least the last one, is yes. The thing that I was most afraid of was connecting the Swash 1400 to the bathroom water supply, but it was actually pretty easy after I watched the installation video. I first thought that I was going to have to turn off the water main in my house, but all I had to do was just shut off the water valve on the toilet.

From there, you just attach this pipe that branches your incoming toilet water (the good water) so it can be used for the bidet. The rest is just installing the Swash 1400 as if it is an average toilet seat. I found that it was a lot easier than I thought it would be, like way easier.

So, once I was there, I had to plug it in. Yes, this is electrical, and the cord is actually only a few feet. Fortunately, you can use an extension cord with this, and I did.

Did I mention that there was a remote control? Well, there is, and there is a mount for the remote control so you can keep it by the toilet paper. What’s really strange is that while I was installing the Swash 1400, I accidentally dropped the remote control in the toilet. It had the batteries in it and everything, and fortunately, I hadn’t used the bathroom too recently. I guess that means the remote is water resistant, or something.

So with the remote, I was able to control the temperature of the seat, and it is nice to sit on a warm toilet seat, really. When I first did the squirters, I got some serious…cold, down there. Yeah, I going to talk about this, and I don’t want to be one of those writers who is trying to be “deliberately edgy”. I was then able to turn up the water temperature, and I found that I had other options, such as deodorizing with a nice dryer.

You can see a video below with the unboxing and such, and you can purchase the Swash 1400 on the Brondell site for $649.00.